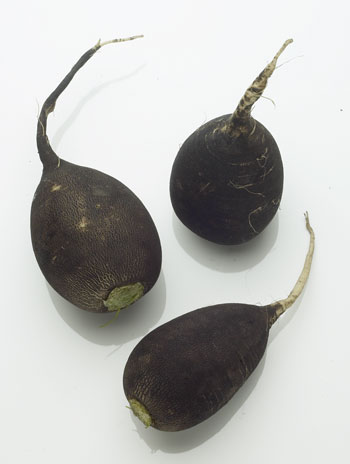 
General Information: Black radishes belong to the Cruciferae family. A root vegetable related to the turnip and horseradish family, with a sooty dull black exterior that covers a white, crisp inner flesh providing a peppery hot flavor. The intensity of this radish can vary from mildly hot to very pungent and somewhat bitter, depending on the age and size, tasting somewhat like horseradish. The Black radish can be either round or elongated in shape. As a round radish, it can grow from two to six inches in diameter. There are two main categories of radishes, either the spring or winter radishes, based on the time when they are harvested. Spring radishes, which mature quickly, are harvested early in their growing season resulting in a smaller radish. The winter radishes, which grow slowly, are harvested later in their growth and result in a larger round or more elongated-shaped vegetable. Winter radishes tend to have a milder, more delicate peppery flavor, however the Black radish can be very strong and pungent.


Nutritional: Black radish is not really nutritious but has many medicinal properties. It is rich in vitamin C which makes it an interesting ally during winter months. Vitamin C helps us fight infections and free radicals. Black radish also contains B vitamins and sulfur.

Its high content of fiber increase peristaltic movements. In addition, it contains large amounts of water. Both water and fiber help our transit and people who suffer from constipation may benefit from this vegetable.

It contains a variety of chemicals that increase the flow of bile which play an important role in the digestion process. Radish help maintain a healthy gallbladder. It also has an antibacterial effect on our digestive flora.

Caution: People with gallbladder problem (stones, obstructions,...) should not eat too much of this vegetable as well as people with hepatic problems.


Applications: This radish may be cooked like a turnip, creamed and served as a side dish, saut�ed and braised to be served as a vegetable dish, or added to stir fry dishes. The skin is generally removed prior to preparing. It can also be served raw to be used as hors d'oeuvres, as a complement to salads and sandwiches or diced for use in soups and stews. If the pungency is too strong, it can be reduced by salting and washing the radish to draw out the peppery flavor, by steaming the radish for 5 to 10 minutes, or by baking the radish with other vegetables. When selecting, choose radishes that are firm, crisp, and without blemishes. They can be boiled, sliced and added to soups or stews. For added flair, peel in a stripped pattern, then cook.


History: They�re traced back to the Egyptians about 3500 BC. The Chinese served them 2700 years ago; the Japanese ate them 1000 years back. Scriptures show black radishes were part of the rigid, ancient Talmudic dietary laws. The Greeks honored radishes so highly, they reproduced them in pure gold and presented them to Apollo, in his temple at Delphi. Early Romans felt the radish was a good food to cure baldness. During the Middle Ages the English believed they cured pains in the joints, shingles and madness. In ancient times, Black Radish was used medicinally as a remedy for cough.